Despite the title of this post and the fact that the writing is mostly concerned with Jia Tolentino’s brilliant book of the same name, the pie pictured is a chocolate-stout and gingersnap tribute to Tamsyn Muir’s GIDEON THE NINTH, the best book about lesbian necromancers in space I’ve ever read.

END_OF_DOCUMENT_TOKEN_TO_BE_REPLACED

A savory brioche french toast to feed your feelings

“[In western democracy] People are manipulated in ways that are infinitely more subtle and refined than the brutal methods used in such post-totalitarian societies. But this static complex of rigid, conceptually sloppy and politically pragmatic mass political parties run by professional apparatuses and releasing citizens from all forms of concrete and personal responsibility; and those complex foci of capital accumulation engaged in secret manipulations and expansion; the omnipresent dictatorship of consumption, production, advertising, commerce, consumer culture, and all that flood of information: all of it, so often analysed and described, can only with great difficulty be imagined as the source of humanity’s rediscovery of itself.”

-Václav Havel, THE POWER OF THE POWERLESS

I am, apparently, not the only person to wonder (usually under the fluorescent, changing-room lights) what it would be like to magically become the most conventionally-hot, sample-sized version of yourself. In her new novel The Regulars, Georgia Clark uses this premise to keenly examine beauty standards while leading readers through a taut, dynamic, and entertaining parade of bittersweet plot points.

END_OF_DOCUMENT_TOKEN_TO_BE_REPLACED

A spice chess pie with a chocolate cookie crust inspired by Petty Magic, by Camille DeAngelis.

Do you ever look back on the first time you met someone important to you and sort of smile knowingly at your past self? It’s so adorably sweet that memory-me has no idea how her life is about to change now that this person has arrived. She’s usually too busy checkin’ out their butt. Similarly, I look back at the Hanna who almost didn’t buy Petty Magic (because she wasn’t sure if she could justify another book purchase) and chucklescoff. In a few short weeks she will devour this book in one sitting, on an airplane, pausing in the darkened cabin somewhere over the Atlantic while everyone else is sleeping to clutch this book to her chest and thank the universe for sending it to her.

END_OF_DOCUMENT_TOKEN_TO_BE_REPLACED 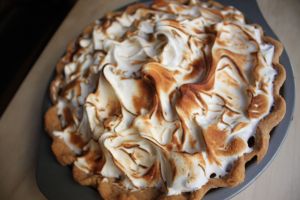 A banana meringue inspired by One Hundred Years of Solitude, by Gabriel García Márquez.

Usually when a book is good we say “you can’t put it down.” This is reserved for books that you miss your subway stop for, that you stay up all night reading, and that you inhale in twenty-four hours and tell all your friends to read. But on very rare occasions I have read a book so good I had to put it down; had to read it slowly, savor it, come up for air. Of those books, One Hundred Years of Solitude was the most difficult, it took me two false starts and almost a year of off-and-on reading to finally get through it. But there is a truth and vitality to it that reaches into the small, scared, vulnerable, utterly human part of you, grips you buy the soul, and drags into the vibrant depths of its emotion.

END_OF_DOCUMENT_TOKEN_TO_BE_REPLACED

Happy Pi day! I think I get wished a happy pie day more than I get wishes a happy valentines day or a happy halloween; occupational hazard. Today’s pie is a sure-to-please salty caramel pie with lots of golden, buttery goodness throughout. It was inspired by Robert Frost’s “Nothing Gold Can Stay,” and thanks to the students of Fieldston Middle School it definitely didn’t stick around.

END_OF_DOCUMENT_TOKEN_TO_BE_REPLACED

A dark chocolate ganache with pomegranate syrup and pomegranate seed garnish, inspired by “On Foot I Wandered Through the Solar Systems” by Edith Södergran.

I recently gave a talk at Fieldston Middle School in the Bronx about books, pie, my day job in publishing, and how rewarding it can be to pursue what you love. To be sure that everyone was on the same page and knew the texts we’d be sampling in pie form, I selected a couple of poems that we could read together. In an effort to diversify and branch out from the typical canon (i.e., read someone other than an old, white, American/British dude), I drew on Haley’s knowledge of obscure international poetry. The poem that she recommended, “On Foot I Wandered Through the Solar Systems,” immediately became one of my favorites for its bold feminine courage and empathy.

END_OF_DOCUMENT_TOKEN_TO_BE_REPLACED

Someone first recommended A Hat Full of Sky, the second novel in Terry Pratchett’s Tiffany Aching series (the YA spinoff of his long-running Discworld series), when I was a preteen myself. Even though I am aging faster than she is (she now seventeen and I twenty-five), I have grown up with Tiffany.

This was not only Terry Pratchett’s last Tiffany Aching book, but the final book in the Discworld series written before his death earlier this year. The witches of the Disc are some of my favorite characters in literature, and with that in mind I wanted to pay tribute to this most excellent author who has affected me so profoundly.