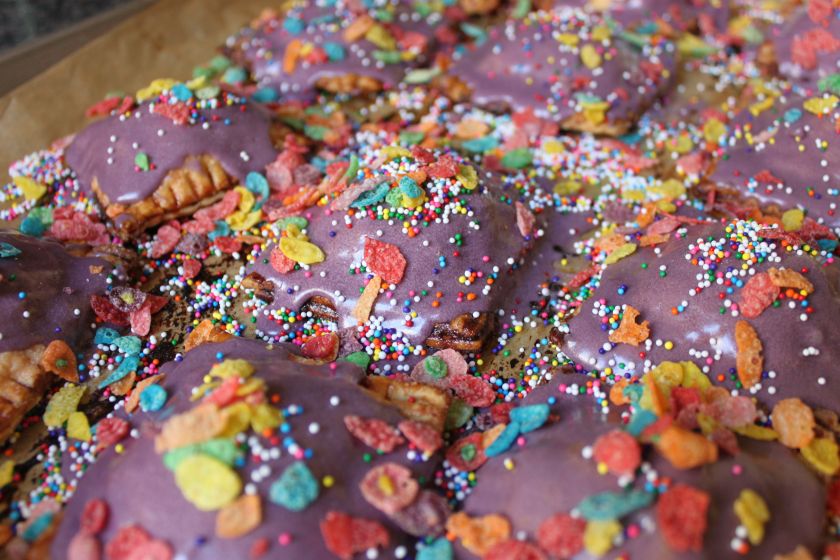 I am, apparently, not the only person to wonder (usually under the fluorescent, changing-room lights) what it would be like to magically become the most conventionally-hot, sample-sized version of yourself. In her new novel The Regulars, Georgia Clark uses this premise to keenly examine beauty standards while leading readers through a taut, dynamic, and entertaining parade of bittersweet plot points.

Best friends Evie, Krista, and Willow are all regular young women living in New York, and all of them feel they’ve hit a wall in their lives. As a journalist and feminist, Evie can’t seem to get her “Glamazon” boss to support her more hard-hitting article ideas. Law school drop out and aspiring actress Krista just can’t catch her big break, mostly because she’s physically incapable of resisting bad choices and financial irresponsibility. Mousy-but-ethereal Willow is struggling to make a name for herself as a photographer in her famous father’s shadow and to overcome the deep-seated body insecurities that prevent her from opening up to her would-be boyfriend Mark. Then the three ladies are gifted a magic potion by a benevolent stranger. It’s called The Pretty. And after several minutes of violent vomiting and shitting their brains out, the girls emerge not just as hotter versions of themselves, but as totally unrecognizable supermodels. Long legs, doll eyes set in porcelain skin, luscious locks, and a number of personalized little touches: white teeth for Evie, lighter skin for Krista, and a pair of perfect tits for Willow. A single drop of The Pretty lasts a week, and what follows is in equal measures hilarious, sexy, heartbreaking, and hopeful as we watch the girls break through the obstacles in their lives and into a whole heap of body-swapping trouble.

When I first read the flap copy for this book I was instantaneously reminded thirteen year old Hanna’s fantasy. I also felt the full weight of the intervening thirteen years (half my life!) it’s taken me to shake those insecurities into a halfway normal sense of self-worth and confidence. But I have the benefit of knowing the editor, Meg Reid, and I trusted that the book would be as whip-smart, thoughtful, and feminist as she is. I was not disappointed.

While the girls navigate their strange and fast-paced new lives (and bodies), they continually grapple with the moral fallout of their decision to use The Pretty. Clark often doggedly pursues a line of questioning or train of thought, requiring her characters to not only question the knee jerk reaction to certain beauty stereotypes, but also the society that has ingrained that impulse in them. It’s not simply about the insecurities of being an average girl in a world that demands glossy, Photoshop perfection, it also takes into consideration the kinds of assumptions we make and stigmas we have towards typically “pretty” people (that they’re dumb or are given more professional opportunities based on their looks). One of my favorite moments occurs just as Evie is succumbing to the heady effects of the Pretty: she’s getting ready for her date with famous author Velma Wolff (another amazingly complex character!), when her mother calls. This interruption reminds the reader that the bodies we so often hate on share and owe so much to those of our mothers, grandmothers, and sisters. It made me realize, when I  rip into my own weight or features, I disparage them as well.

This is the kind of book about both the struggle and the magic of New York City that drew me here in the first place. I don’t think thirteen year old Hanna could have handled some of the body-image realness, but the equally grungy and glittering semi-fictional city I fell in love with is present in each girl’s story. Each narrative has a different tone and flavor, weaving together to make the book dynamic and colorful as a whole, just like the city. Krista is a frenetic roller coaster crazy enough to give you whiplash, with a Hollywood carnival feel to boot. Evie’s is a steady drum beat marching through the glossy-paged, Devil Wears Prada-esque world of fashion magazine publishing, with a side of Brooklyn literati glitz. And Willow’s story inhabits the sad, muted palette of lonely nights in Village dive bars and the quiet tragedy of peeking into someone else’s bedroom in a city where personal space is so precious. In many ways it’s easy to feel superior to these girls; they sure do know how to complicate things for themselves. But we’ve all been lonely, heartbroken, dramatic, and at some point we’ve all made a huge hot mess of our beds and had to lie in it. Even though the plot has magical elements, that pace and larger sense of intent is the stuff New York addicts crave. 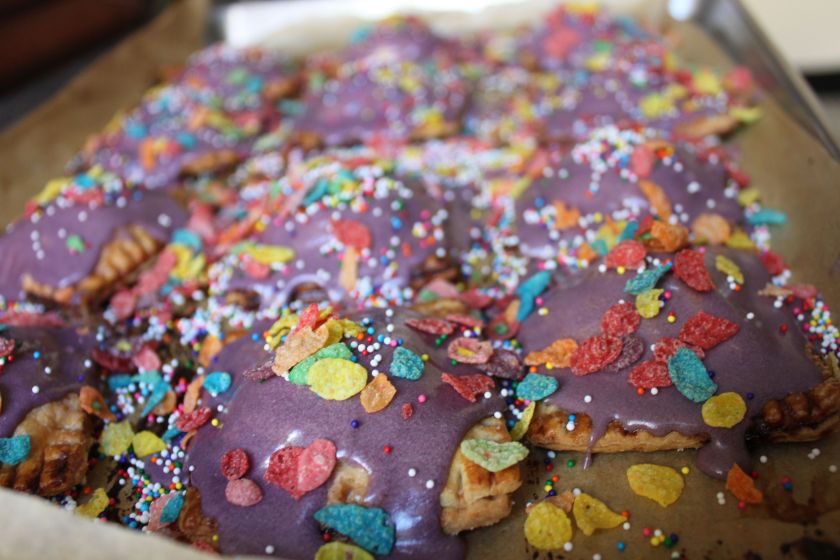 Obviously, being a twenty-something woman in New York I project a lot of myself onto these girls and there is only one form this pie could take. For the young, ambitious girl on the go, I give you: poptarts!

Pie is earnest and genuine. Like the three heroines of the book, pie has good intentions. These pastries are unadorned flaky goodness wrapped around a naturally sweet core. I did consider grape jelly, but that just felt a little too on the nose, a little too aggressively Pretty, and I wanted it to be a bit more subdued. So I went mixed berry: mixed berry for mixed feelings about my body. The Pretty is a vibrant purple color, which stands out even in a book filled with delicious dresses and other lusciously sexy details, so I knew the icing for these poptarts had to be the same eye-catching color. It came out fairly unnatural looking, but I also added sprinkles and Fruity Pebbles as a garnish to heighten the sugary, processed, artificial feeling of these hand pies even further, transforming them into the “Pretty” version of themselves. These Pretty poptarts are attractive, aggressive, and syrupy-sweet to the point of making your teeth squeak.

Preheat the oven to 375 degrees, line a baking sheet with parchment paper.

Cut the crust ingredients together with a pair of knives, pastry knife, or clean fingers and work it until it is cohesive, but not tough. Roll the dough out and use a cookie cutter (or knife) to cut 2 inch by 2 inch squares of pastry. (I placed them stacked in the refrigerator while waiting to use.) On the bottom square, place about a tablespoon’s worth of jam, spreading with the back of the spoon and leaving about 1/4 inch around the edge. Prick the top square with a fork for ventilation (this is easier to do before layering) and lay it on top of the jam square. Using the tines of your fork, crimp the edges of the poptart. There shouldn’t be so much jam that it squeezes out the sides, but if it does just wipe the edges! Repeat until all the dough has been used. Beat an egg, brush the surface of each poptart with an egg wash, and sprinkle with a bit of granulated sugar.

Bake on the parchment-lined sheet for roughly 30-40 minutes, or until golden brown. They may leak a little, but the parchment paper will keep the bottoms from caramelizing and will make clean up stress free for you and the roomies.

In the meantime, combine all the ingredients for the icing, adding drops of both red and blue food coloring until the icing is your desired hue of purple. Once the poptarts have cooled, smear with frosting and go wild with the toppings!

These poptarts are for eating in a rush, something shocking and sugary to wake you up and wash down your coffee on your crazed morning commute. How is the M train so god damn unreliable?!

One thought on “Pretty Purple Poptarts”