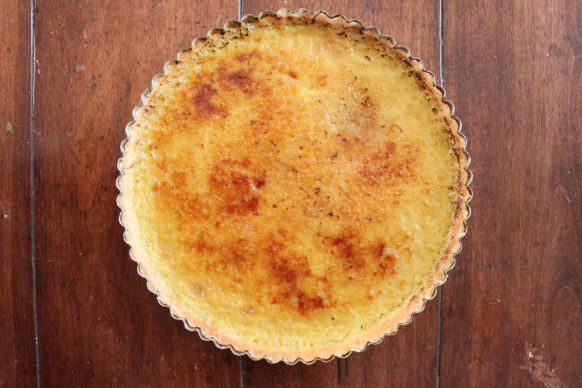 A cognac crème brûlée tart inspired by Mikhail Bulgakov’s The Master and Margarita.

Magical realism is probably my favorite genre; I like how introducing the fantastic into an existing political or social context engages both my imagination and my (somewhat pretentious) analytical sensibilities. I think in spite of unusual occurrences in Mikhail Bulgakov’s The Master and Margarita, most people would describe it as a satire or political novel before they would call it a fantasy. But I think it is both, and so much more besides!

The book is split into two narratives. The first follows an absolute chorus of characters in 1930s Moscow. This includes the Devil and his retinue, who are wreaking havoc on the bureaucrats, snobbish artists, and atheists of the city. The second narrative tells the story of Pontius Pilate and the sentencing of Christ. The thread that connects them is an aspiring writer referred to only as the Master, condemned to an asylum in soviet Russia and yet writing about ancient Jerusalem as if he lived there. When he disappears without a trace, his lover, Margarita, decides to track him down with a little supernatural help from Moscow’s most dangerous new visitor. 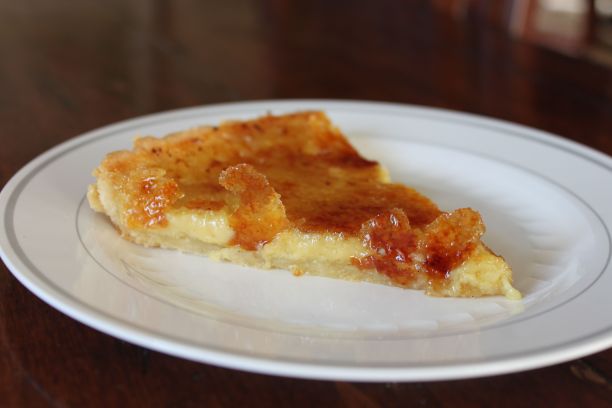 The Master and Margarita is, to put it quite simply, a stunning book. While I’ll admit there are parts that are excruciatingly dense, there are also moments that are absurd, terrifying, and downright magical in the most classical, elegant sense of the word.

The devil – Woland, they call him – struck me as more complex than your typical Christian villain; he’s morally ambiguous. He gives Margarita extraordinary powers, strikes a fair deal with her to find the Master, and when they are reunited he grants them their happiness together. By the end of the book I found myself surprised, not by my sympathy for the devil, but by how he seemed to be showing sympathy for others in his own skewed way; different, contrasted, from the forgiveness and empathy of Christ.

The first time I was exposed to this piece was in 2012 in London, where I saw a highly inventive and enthralling stage adaptation by the acting company Complicite. At first I had no idea what to expect, but as I watched the Master and Margarita make their escape across the star-strewn heavens, I knew their love story was something special. I knew I had to read the book. 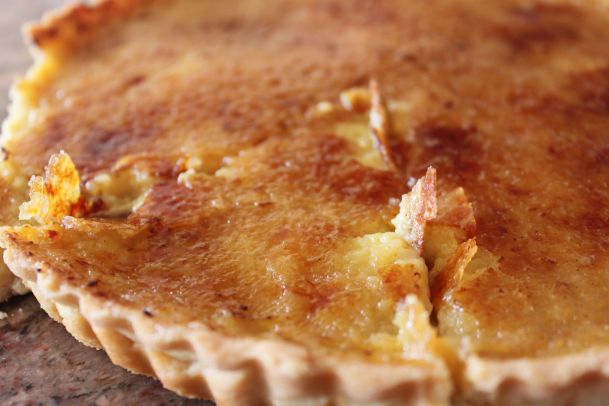 Personally, I think this might be my favorite pie I’ve made for this blog so far, both in terms of theory and execution. It is so deliciously and delicately sweet, but with an alcoholic bite. (Unlike the Wonderland tart, for example, which others loved but was cloyingly sweet to me.)

I started with the moon.

The moon is a striking, reoccurring visual, particularly in the chapters where Margarita is riding through the night sky as a witch (although it crops up in a very pointed way throughout the book). I wanted to bake a tart, shallow and gloriously round, so when you look down on this dessert from above it would appear as though you had plucked the full moon from the sky.

From there it was a matter of latching onto a flavor from the book to create whatever pale custard went into the center. Everyone in this book is constantly eating caviar and downing vodka, but those don’t exactly lend themselves to pie very well. However, during the devil’s midnight ball on Good Friday, Behemoth (an anthropomorphized black cat who walks on his hind legs) dives into a pool full of cognac. I know very little about cognac, but had an impression of it as sweeter and alcoholic and decided to give it a go.

I knew it would have to be a custard, but I also wanted there to be texture to the surface; to make it pocked and pitted like the surface of the moon. I had already been playing with the idea of the devil and fire and introducing an open flame somehow, when I realized that a crème brûlée filling would allow for both. i wanted to juxtapose the cool, airy freedom of Margarita and the moon with the fiery chaos of Woland and his retinue. And whenever I’m looking to add a little chaos to my kitchen routine I usually reach for the twelve-inch propane tank with blowtorch attachment that my father keeps under the sink. No delicate kitchen torches in our house. 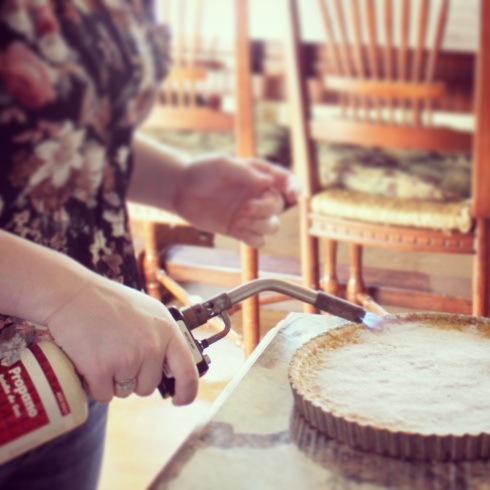 *(I will say, I rolled this crust out thin enough that I needed only about half to three-fourths this recipe.)

Combine the flour, butter, sugar, egg yolk, and heavy cream in a bowl and use some combination of hand and pastry cutter to bring it together into a soft dough. This can also be done easily in a food processor. Wrap the dough in plastic wrap and place in the refrigerator for approximately 10-15 minutes. Last time I made this crust (for the Bennet Sisters tart) I found it hard to roll out, however, chilling the crust beforehand makes this much easier and allows for a thinner, lighter crust!

Once chilled, roll dough out and line tart pan. Cut parchment paper to fit the inside, fill with dry beans, uncooked rice, or pie weights and blind bake for about 10-15 minutes, until slightly golden brown around the edges.

To make the filling, add cream to a medium saucepan over low heat. Split the vanilla bean lengthwise and scrape the seeds out of the center into the waiting cream. (I’d never done this before, the recipes I found while researching crème brûlée make this sound easy, it is not.) Add half the sugar (1/4 cup) and the cognac, turn up to a medium heat, and stir until dissolved. In a separate bowl combine the egg yolks and the remaining sugar and whisk together. Slowly pour the heated cream into the egg yolks, whisking continuously.

Place the waiting tart shell in a sheet pan; it makes removing it from the oven so much easier! Strain this custard through a fine-mesh sieve into a clean bowl or straight into the tart. Bake for about 30 minutes, until the center just barely wobbles. Cool tart on a rack for 30 minutes, and follow it up by chilling in the fridge for an hour or more.

This tart is extremely versatile; serve at your next demonic fete or share with your lover on a calm afternoon in a basement apartment.