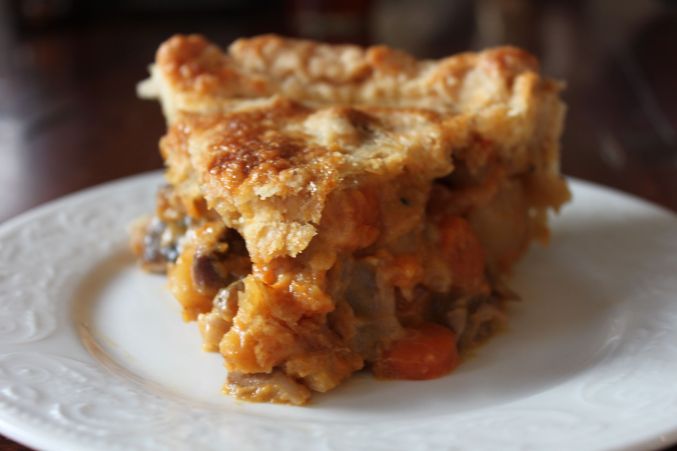 A creamy mushroom and root vegetable savory pie inspired by The Hobbit by J.R.R Tolkien

I wasn’t a very strong reader as a kid and it was hard for me to find books that I found engaging. J.R.R. Tolkien’s The Hobbit bridged the gap between the casual reading of popular literature, and a lifetime literary obsession. I discovered a whole genre, a lineage, of fantasy and a way of thinking I had thought particular to me. Disappearing inside this world, which was somehow the joint creation of a man thirty years gone and of my own imagination, was magical.

The titular hobbit in question, Bilbo Baggins, is living more than peacefully when a wizard and a troupe of thirteen dwarfs enlist him to help them win back their subterranean, jewel and gold-filled homeland from the nefarious dragon Smaug. Bilbo, going against his own grain and comfortable nature, joins them on their quest. This takes them through perilous lands into the shadow of the lonely mountain, Smaug’s demesne. It also finds Bilbo, lost and separated form the group, in a famous game of riddles with an uncanny, vindictive little creature, the results of which have epic ramifications.

People often refer to The Hobbit as the prequel to The Lord of the Rings trilogy, which isn’t so. Initially Tolkien wrote The Hobbit for his own amusement and that of his children, when it was published to startling popularity, his publishers requested that he write a sequel (which turned into the epic fantasy trilogy we know and love and took him more than ten years to write). The public wanted to know more about these clever little hobbit creatures and the world they lived in.

When I was studying abroad in London a few years back, one of my professors (Clive Bloom, you may remember him from my Frankenstein post) mentioned Tolkien and The Lord of the Rings tangentially to another book we were discussing. “It’s just an alternate history of Europe,” he said, “all high fantasy is.” Which seems pretty obvious, but when it was laid bare like that it kind of made my little collegiate brain explode. “Hobbits are just the English.”

Tolkien himself asserted, “I am in fact a Hobbit in all but size,” citing his penchant for gardens, good food, ornamental waistcoats, and being a pipe smoking homebody. In addition to being a bit short with rather large feet myself, I feel this hard core. I present as evidence my growing collection of velvet jackets and the fact that nothing makes me happier than a cup of tea, a good book, and a slice of pie. …Except maybe a pint.

Considering my bias, this pie is really an ode to hobbits in general, rather than encompassing the full range of flavors in the individual book.

Also among Tolkien’s list of things he and hobbits love? Mushrooms. It seemed obvious that they should be the focal point of this pie. From there I considered what else you might see in a hobbit’s garden. Fingerling potatoes are my favorite to use in cooking and they have the added bonus of being roughly hobbit-sized, other root vegetables like sweet potatoes and multicolored carrots are always solid choices to round out a hearty stew. (This may sound familiar from the Bear Harvest Pie, no worries, subtle changes make this pie extremely different)

Whenever possible I try to shop local farmers markets. While I was in Cleveland over thanksgiving I went to the North Union Farmers Market at Shaker Square and there was a vendor selling more than a half a dozen different kinds of mushrooms! The beauty of sourcing your produce locally (in addition to the benefits to the community) is that the vendors are usually more than happy to share their knowledge. I asked what kind of mushrooms he would recommend for a pie with lots of colorful, seasonal vegetables and he gave me some woody, savory shiitakes and some soft, chewy blue oysters. 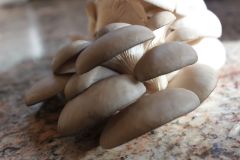 I also wanted to incorporate cheese into this pie. Cheese is one of my own hobbit-y creature comforts. I opted for a local chevre with black truffle from Mackenzie Creamery, although a plain chevre or other soft goat cheese would do just as well. I reasoned that hobbits probably wouldn’t keep cows, being unwieldy and difficult to manage for people so small, so goats would be a much more convenient source of dairy for them.

More than anything I wanted this to be a pie you could drink to. I have a very fond memory of visiting some family friends while I was studying in England, having one-to-many a drink, and digging into a delicious savory pie. This recipe is designed to keep everyone pleasantly warm and fuzzy and to prevent anyone from waking up the next morning with an empty, hung-over stomach.

Preheat your oven to 375 degrees Fahrenheit.

The bottom crust is a half-portion of my standard pate brisee, the top crust is a variation on the rough puff I talked about in my last post. Rather than rehash how they come together (yet again), I’m just going to link you to that tutorial! Lazy, but effective. You can make these while the filling simmers and thickens, but if you’d rather not juggle the tasks just make them ahead of time and pop them in the fridge.

Melt approximately 2 tablespoons of butter in a large, deep-dished, high-sided sauté pan over medium heat. Add the garlic and onion and allow them to lightly brown. Add the carrots, potatoes, and sweet potatoes. I managed to get my hands on some purple and white carrots in addition to orange, which add a nice bit of unorthodox color to the pie! You want these to soften and get a bit translucent, while they were cooking I took both kinds of mushroom caps and shredded them directly into the pot. The blue oysters I tore into strips and the shiitakes lend themselves really well to being broken in half and then halved again. 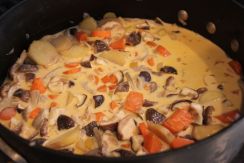 Pour the veggie broth and cream over all of this and turn it down to a simmer, salt and pepper at your leisure. I also added in two tablespoons of chevre, which thickened it nicely, but also had a little extra bite to it which cut the starchy heaviness of the root vegetables. I didn’t cover the filling this time because I wanted to cook down a little more noticeably. It should cook down for approximately 20 minutes, until it has a gravy-like consistency. Remove from heat and allow it to cool for a bit (this will prevent the butter in the flaky top crust from melting prematurely).

Line the pie plate with the bottom crust and spoon the filling into the bottom. Roll out the top crust, lay over top, crimp, and brush with egg wash. Pop it in the oven for 45-50 minutes or until the crust is golden brown.

Serve surrounded by pint glasses and friends (I opted for Great Lakes Brewing Company’s Christmas ale and then promptly took a nap). Something light and bubbly would cut the heaviness of the filling nicely, I think. Gather friends and family around on party business and enjoy as part of a raucous celebration. Or, keep as leftovers and serve when unexpected guests arrive!