Chocolate ganache infused with lavender and earl grey in a lemon sweet pastry crust, inspired by Pride and Prejudice by Jane Austen.

Can you believe that after earning a bachelors degree in English I still hadn’t read Pride and Prejudice? Somehow we just never crossed paths in the classroom. It seems criminal not only to have never read Pride and Prejudice, but to have never read any Jane Austen at all! Especially considering how much I enjoy romantic tension built on people not touching. (Give me pithy banter and absurd social decorum, I love me a period piece.) I was appropriately ashamed of the hole in my education, and rectified the oversight with a tart.

The book follows Lizzy Bennet and her four sisters through the various trials and tribulations of regency-era society. Mrs. Bennet feels the need to get her daughters married off (preferably to the richest men possible) before Mr. Bennet kicks it and leaves them destitute. It bears mentioning that Mr. Bennet is in fine health and his wife is just a hot, dramatic mess. Jane, the eldest daughter, meets and falls in love with the exceedingly affable Mr. Bingly. At the same time, we meet Mr. Bingly’s super surly (but totally loaded) friend, Mr. Darcy. Darcy, in spite of being a romantic paragon of popular culture, spends a decent portion of the book being a huge dick. However, you get enough of his perspective to realize that it’s not really pride, just crippling social ineptitude that makes him this way. A prime example: when Darcy first proposes to Lizzy, he essentially says, “you have no money, your connections suck, and your family is an embarrassment, but I guess I could be bothered to marry you anyways.” Lizzy, gets upset (rightly so!), gives him what for, and Darcy spends the rest of the book trying to make amends for all the crap he’s said and done to make Lizzy prejudiced against him. 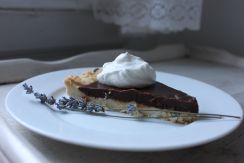 Today Jane Austen has become synonymous with chick lit, which is surprising because girl had a mad-caustic wit. Most of the characters are portrayed with a kind of weary disdain. Mrs. Bennet’s obnoxious verboseness, Mr. Collin’s oblivious social faux pas, Lady Catherine’s penchant for giving unwanted advice; they’re caricatures meant to highlight the absurdity of fashionable (supposedly civilized) society. For the most part Lizzy Bennet is the straight woman, meant to make them seem even more heightened by being down to earth and even a little bit cynical. The effect is still, yes, a romance, but one that happens in spite of the lovers’ environment being exceedingly irritating. Not only does Lizzy and Darcy’s romance surmount social convention, it does so in a society that appears to actively promote irrationality and absurdity.

When I was coming up with a pie for this book, I wanted to create something that all of the Bennet sisters would enjoy. Having three sisters myself, I know how hard it can be to agree on things, especially what to eat together.

The chocolate ganache filling has five ingredients, one for each of the Bennet sisters. Lydia, decadent and silly, is the chocolate. Kitty, barely there (but still important), is the vanilla. Jane, sweet and wholesome, is the lavender. Lizzy, strong and a little bitter, is the earl grey tea. And Mary, sensible and slightly bland, holds it all together as the cream.

Preheat your oven to 350 degrees.

The pâte sucrée (sweet pastry) crust is simple. You can either make it in a food processor or rough it together by hand. Start with the flour and cube the cold butter into the bowl. Add the sugar, egg yolk, cream, and zest and knead vigorously until the dough comes together. Wrap it and place it in the fridge for about 15-30 min so that it is nice and cold when you press it into the tart pan. I don’t bother rolling out these kinds of crusts, they’re just easier to press into place with your fingers. Use a fork to poke holes in the bottom of the crust, line the bottom with a piece of parchment paper cut to fit and blind bake it with beans, pie weights, or even rice for roughly 40 min or until golden brown. While that is baking you can make the ganache.

Heat the cream on low in a medium saucepan until it is just bubbling around the edges. I used loose tea, so I loaded my tea bag with both the tea and lavender. (Alternately, if you get Earl grey tea bags you can just use two of those and one bag for the lavender. Adagio.com has nice, cheap, disposable paper tea bags!) Allow the tea bag to steep in the hot cream. Then, using the back of a spoon or a rubber spatula, press the infused cream out of the tea bag. Alternate between steeping and pressing three or four times. If a film forms on the surface of the cream it’s not the end of the world, just try to keep it as smooth as possible, stirring almost constantly. Add the dash of vanilla and then the chocolate. Stir the chocolate until smooth. If your tart crust isn’t finished baking you can easily keep this over a low simmer, stirring often, until it is.

When the crust has cooled pour the ganache in and then place in the fridge until firm. Garnish with a little homemade whipped cream. Serve this tart when company comes to call (maybe a handsome suitor!) or while taking a much-needed tea break in between shopping trips.